Global electricity production has almost doubled in the last 20 years. Environmental regulations and economic considerations challenge energy consumers to be more efficient in the generation of power. Remarkably, the most valuable source of clean power has long been overlooked.

Every year, thousands of potential megawatts are lost in the form of industrial waste heat.

How do we capture its economic value?​ 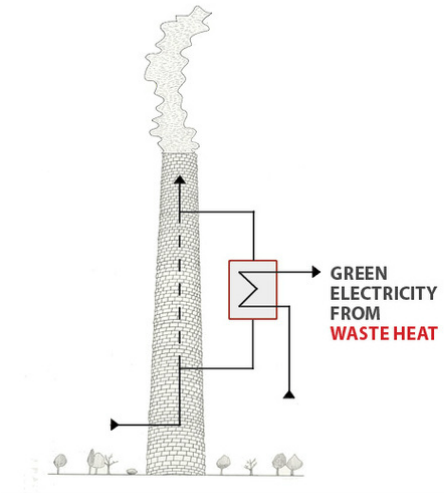 How does it work?

​Pump
The main pump brings the pressure of the working fluid, depending on the rotation speed of the turbine, up to a working pressure of approximately 35 bar.

Regenerator
For better efficiency, in most applications, the recuperator can be used. In the recuperator the working fluid is preheated by the vapour leaving the turbine.

Evaporator
In the evaporator the working fluid is further preheated, evaporated and superheated.

Turbine
In the turbine the working fluid expands which drives the electrical generator and the main pump.

Condenser
In the condenser the working fluid is condensed through water-cooling. 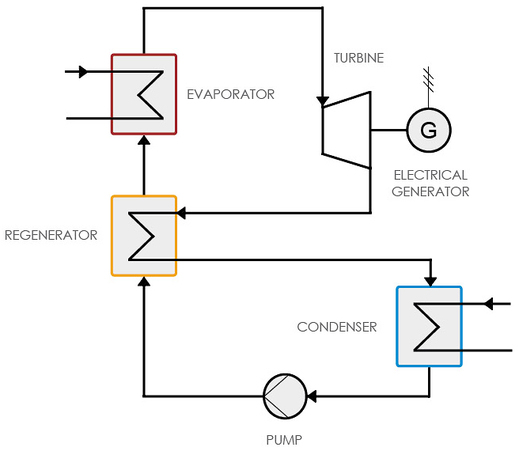 What can waste heat do for you?

In the coming decades, global developments will confront mankind with unprecedented challenges: climate change, a population growth far beyond Earth‘s present carrying capacity, the global striving for prosperity, and increasing demands for energy and water, are the core problems we are faced with 2000 years of global industrialization have resulted in an unparalleled standard of living and an increased life expectancy for part of the world‘s population. However, all this has been and is still being achieved at a price: alarming environmental destruction as well as climate change which can no longer be ignored. These things will mean dramatic changes to life on Earth in the future.
To this day, our industry-based economy is mainly based on the use of fossil fuels. Within an unusually short space of time (from a geological point of view) the combustion of these fuels has led to a significant increase in the concentration of CO2 in the atmosphere. This is the undisputed cause for increases in global temperatures and changes in the world‘s climate that are now in progress. Meanwhile, more than 6.5 billion people consume far more natural resources and produce far more pollution than the Earth can accommodate. The human population‘s so-called ecological foot-print is already larger than the Earth can sustain. The average temperature rise in the atmosphere, the melting of the polar ice caps as well as the increase in the extreme weather events worldwide are obvious signs that we are putting too great a strain on the Earth. If we do not change our behaviour with determination and stop the accumulation of the CO2 in the atmosphere, we will be faced with disastrous consequences.